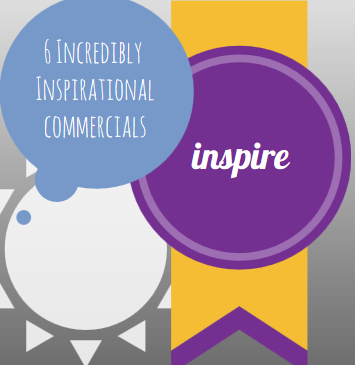 Commercials, as content pieces, have evolved beyond the “buy now!” model and taken on the challenge of trying to appeal to the audience on an emotional, or even personal, level.There are commercials that transcend the products they are selling to hit us on a human level, inspire us – and make us feel something.

The brand has a stake in the action, of course, and is looking to align their product and brand with the feelings we as an audience get as we take in their inspirational message. It’s a risky play and takes a lot of tact to pull off well, but here are 6 great examples of commercials that managed to inspire.

Strong roots and a healthy shine? Not this time for hair product producer Pantene. The company took another approach entirely.

In this four-minute commercial, a deaf woman undergoes the trials and tribulations of trying to learn to play an instrument despite her physical limitations. She’s faced by obstacles ranging from her disability to a venomous rival (and even some rowdy street kids). In the end, she triumphs over her struggles and delivers a performance worthy of a standing ovation – and just so happens to showcase her incredible mane of hair along the way.

Cue up the wind machines, grab yourself a hanky – and enjoy.

For years now, Dove has been producing commercials and content surrounding the idea of “real beauty” – the kind that does not conform to a false ideal or the unreasonable expectations placed on women by society. It’s been a turbulent campaign that is not without its critics, but a lot of thought-provoking ads have been made in the process.

In this one, a forensic sketch artist draws women, sight unseen, based on descriptions from both them and strangers they encountered earlier.  The comparison photos at the end reveal the negative discourse many women have with themselves, and reminds the audience that they are their own worst critics.

Remarkable in its simplicity, this ad from Nike eloquently tugs at the definition of “greatness”, challenging the audience to rethink the things we believe about becoming great and questioning the source of our insecurities. Rather than ruin it with a lengthy description, we’d encourage you just to push play.

How on earth does the world’s largest producer of sugary, unhealthy soft drinks take on the challenge of obesity? As it turns out, really, really carefully. You won’t see the words “obesity” or “health” anywhere in the ad, but by drawing comparisons between the insanely hectic lives of a modern man and contrasting it with an idyllic picture of years gone by, Coke is able to get audiences nodding their heads and smiling along.

Ahhh, remember the good ol’ days? You will, even if you weren’t alive to see them.

Bonus points must be awarded  to coke for personalizing the message at the end with photographs of consumers and their grandpas. Step into Coca-Cola's time machine with this commercial.

Everyone loves a good heart-warmer. In a world where there seems to be nothing but bad news on the television – and where beer ads come chock-full of party-living and bikini babes, Guinness decided to do something a little more… refined.

By appealing to our sense of loyalty and playing on a concept we all understand (friendship), Guinness will really have you feeling that you’ll become a better person just be tipping back a pint. Don’t believe us? Have a watch:

What goes around, comes around. It’s an old saying we’ve all heard before, but it takes on new life in this moving advertisement by media conglomerate True Move. Using the medium of storytelling instead of an overt advertisement, the company has viewers reaching for the tissues as it reminds us all that sometimes, giving selflessly to others will make an enormous amount of difference in our own lives as well.

Have you got a favorite inspirational ad, or a commercial you thought was brilliantly executed? Let us know in the comments!